08:00h – Beginning of the Expedition. Exit of Palmas towards Waterfall of the Roncadeira and Waterfall of the Escorrega Macaco. With 70 meters of height, the fall forms a small lake of cold and invigorating water. The Roncadeira Waterfall along with the Waterfall of the Macaque Escorrega receive about 400 visitors per day in high season. They are on a private property, which is located inside an APA, so the visitation is controlled and entrance fee is charged. To get to the waterfall you must walk a trail, in the middle of the forest, 1500 meters.

12:30h – Lunch at Ponte Alta from Tocantins and exit to the Canion do Sussuapara, 20km from Ponte Alta. The Sussuapara Canyon which is also called the Sussuapara Waterfall is 20 kilometers from the Tocantins High Bridge. This small town also serves as a base for Jalapão tours. Here, rock walls of 15-meter high sandstone open to give way to the small cascade that say they make wishes. All you have to do is get under the waterfall, close your eyes and have positive thinking.

17:00h – Arrival at Pedra Furada to contemplate a beautiful sunset of Jalapão. Pedra Furada is located approximately 30 km from the city of Ponte Alta do Tocantins. It is a very far away attraction and to get you passes of 4 × 4 by eucalyptus forests and by dirt and sand roads. It is a large set of sandstone blocks, which was carved by the action of rain and wind winds, forming several holes in arched shapes that resemble some portals. Arriving at the place, you can take a trail to the right that will give the largest portal, a perfect break for photos. If you go to the left side you will find another trail that will lead to the top of the rock where you can find two more holes and have an incredible view.
19:30h – Arrival in Ponte Alta for dinner and overnight.

08:30h – After breakfast, exit Ponte Alta towards the heart of Jalapão. Arrival at Cachoeira da Velha, 100km after Ponte Alta, for a contemplative visit. Cachoeira da Velha is one of the main attractions located within the Jalapão State Park and the largest waterfall in the region. The power of this waterfall offers a grandiose spectacle for tourists, who can get very close by following the wooden platform built especially for observation of the landscape. Although very efficient, the platform does not allow to see the entire waterfall, which is formed by two semicircles, one with back to the other. They are 100 meters wide and 15 meters fall. Highlight the tree that grows in the middle of the waterfall, in the wall that separates the two falls. Tourists who visit the site only by the platform see only one of the falls. The bath in the waterfalls with access by the platform is not allowed, also because the water force is very great. Cachoeira da Velha receives the waters of Rio Novo, one of the largest drinking water rivers in the world.

13:00h – Reinforced snack in Prainha do Rio Novo, 5 minutes from the Cachoeira da Velha, with break for a refreshing swim afterwards. Considered one of the largest drinking water rivers in the world, Rio Novo is one of the best spots in Jalapão for a swim. Although there are dozens of small beaches along the course of the river, a specific attraction attracts the attention of tourists. And no less! Prainha do Rio Novo, located a few meters from Cachoeira da Velha, has a long strip of white sand, calm water and plenty of shade for those who want to rest. After bathing, we set off for the Dunes of Jalapão, 90km past Cachoeira da Velha, to contemplate an unforgettable Sunset. They arose from the erosion of the region's rocky outcrops over time, and are the second reason why the region is called the desert the other is the low population density. The dunes are a natural spectacle whose altitude varies from 200 to 400 meters, from where one can see the beautiful landscape of sands that reflect the sunlight in varied shades of gold mixed with the blue of the rivers and, here and there, of the green of the vegetation typical of the region and the buritizais that flourish at the edge of springs. From the dunes you can see Serra do Espírito Santo, the paths of golden grass and the lakes that are like oasis in the middle of the desert. Objects found there indicate that the place was once the bottom of an ocean. Just as in the viewpoint of the mountains, sunrise and sunset are spectacles apart, which compensate for any difficulty in reaching the dunes. After Sunset we continue to Mateiros, 50km after the Dunes, for dinner and overnight. 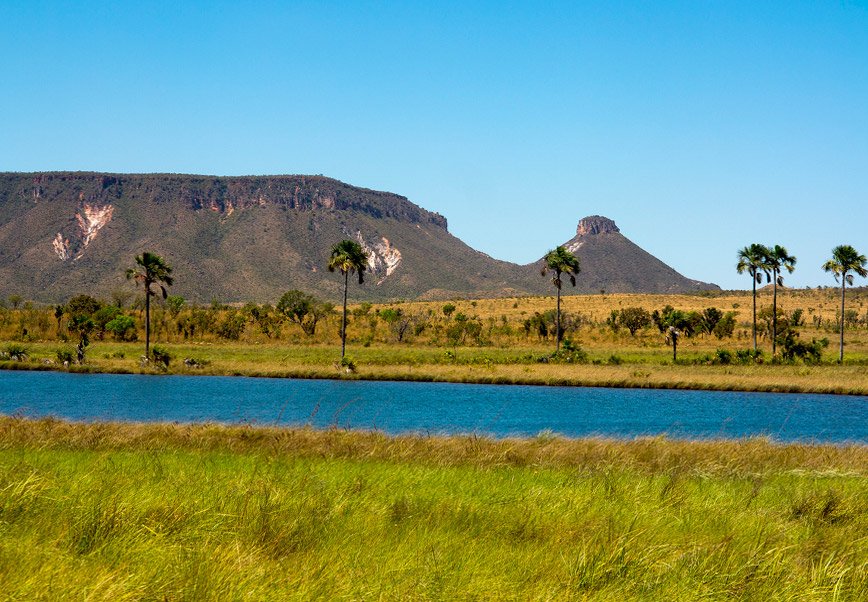 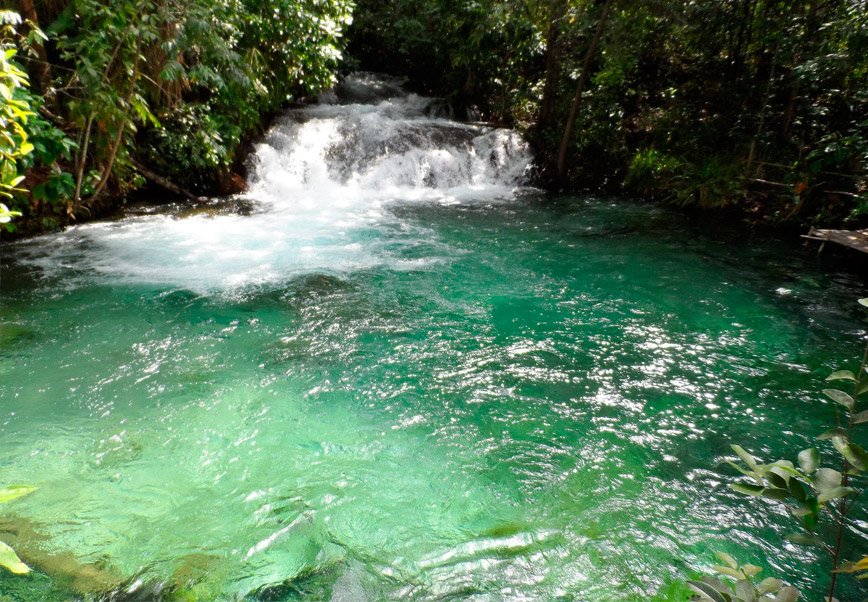 04:00h (Optional - charged separately) Trekking trip to the Serra do Espirito Santo (250mt of slope and 3km of light hiking). Those who choose not to do can rest until later or visit the handicraft shops in Mateiros. The Serra do Espírito Santo is one of the most emblematic landscapes of Jalapão. The long and straight sandstone plateau is followed by pyramid formation at one end, an unmistakable silhouette that has become a trademark of the region. Serra do Espírito Santo is located next to the Jalapão Dunes and is considered responsible for the formation of the sand park. The rock suffers in a perfect way the action of the wind that causes all the material of the erosion to be deposited in the same place, thus forming the dunes. A unique phenomenon in the Brazilian cerrado.

09:00h – After breakfast, we set out for the Fervedouro do Ceiça to experience the indescribable sensation of being floating. First fervedouro to be divulged for the public, the Farming of the Cider still today is among the most famous and visited of Jalapão. The well has a main spring and the pressure intensity is very high, making visitors float easily. The fervor is very round and surrounded by intensely green banana trees that give an even more striking tone to the spring. The water seeping from the boil falls into a natural aquarium out of the main fountain. Next, visit to the cradle of the harvest and handicraft of Capim Dourado, the Community of Mumbuca. About 360 km from Palmas, capital of Tocantins, lies the quilombo community of Mumbuca, located in the municipality of Mateiros. Founded by two couples, who according to one version of the story, were descendants of slaves, the community today gathers 46 families, around 100 people. Clay brick houses now have televisions, refrigerators and computers, but until 2001 they had no electricity. The community developed economically and culturally through the production of handicrafts with golden grass, an activity that became a symbol of Jalapão and the entire state of Tocantins. The making of the pieces, which vary between objects of decoration and costume jewelry, has been passed for five generations and preserved as one of the main tourist attractions. In addition to the golden grass, the tradition still includes the use of other natural resources, such as buriti.

13:00h – After lunch, we visit the Formiga Waterfall, for a refreshing swim in its emerald green waters. The intense emerald green of the Waterfall of Formiga enchants the tourists who visit the Jalapão. The waterfall is among the most beautiful in the region and, certainly, among the most visited. The waterfall is not very big, but the pool that forms is wonderful! And the good news is that the water is not super-frozen, on the contrary, it is at the exact temperature to quench the heat of the Jalapão without letting anyone dying of cold. Besides the great temperature, the water of the Ant Falls is so transparent that it allows to see the bottom of limestone. Those who dive can still see the big stone that gives shades of blue to one of the stretches of the waterfall. Really spectacular! At the end of the afternoon we leave for Mateiros or São Félix (depending on the availability of vacancies in the inns) for dinner and overnight.

07:30h – After breakfast, visit Fervedouro Bela Vista, in São Felix do Tocantins, considered the most beautiful of Jalapão by many. Considered the most beautiful of Jalapão, the Fervedouro Bela Vista is an unforgettable visit for those who are in the region. The pool of this fervedouro is the largest among all the fervedos open for visitation and counts with 15 meters in diameter of water transparent and incredibly blue. It is impossible not to be mesmerized by the color of water and the beauty of nature surrounding space. From there, we will savor a delicious lunch with a bath break in the Araras Waterfall. The waterfall does not have a very large waterfall, but the stone wall filled with green gives a wonderful tone to the look. The violence of the water is not so great, which allows you to get close enough to the fall and even walk behind it. The water temperature is perfect for hot days and soon after entering the waterfall the body will already be accustomed to the temperature. It is possible to take advantage of the large water well or even sit on the natural stools made from tree trunks that are inside the waterfall. A delight to end the trip around Jalapão.

13:00h – After lunch we set off towards Morro Vermelho, with its formations that resemble figures, after stopping for photos in the Serra da Catedral. Morro Vermelho, also called Morro do Gorgulho, has some very different rock formations, reminding several chimneys. They were carved by the action of the wind and the frequent climatic changes of the region. Everyone who visits Jalapão is impressed by their immense horizons. Time and again, these infinite voids are broken with the sight of the saws. One of them calls attention to having the shape of a Cathedral. The Serra da Catedral has a rocky formation that rises on the top of the hill an impressive wall resembling a church, its exuberance in the middle of the Cerrado is a guaranteed stop for photos. 19:30h – Arrival in Palmas (forecast). End of Services.

Price based on 2 persons: Another number of persons on request

The hotel / pousada selection in Jalapão depends on availability and can only be defined at time of booking. We strive for the best possible accommodations

Prices and programs subject to change