The dream combination for a trip to Brazil!

On this exclusive journey, you will visit the most beautiful, interesting and impressive sites in Brazil. The journey begins in the Afro-Brazilian Salvador of Bahia, which was the capital of Brazil until 1763. You will also visit the capital of today, Brasília, a futuristic capital, provided on the dashboard. A natural highlight awaits you at the spectacular Iguaçu waterfalls. And of course, you can also explore the city of Rio de Janeiro, one of the most exciting metropolises in the world! It is best to extend your trip at the end of this tour and enjoy some relaxing and interesting days in Rio or in one of the spectacular resorts.

Salvador da Bahia, once the capital of Brazil and the center of slavery, is undoubtedly one of the most interesting cities in Brazil. The city is full of life and remains the cultural center of the country. In the lower part of the port is the famous Mercado Modelo, a market with a wide variety of crafts and souvenirs. The elevator "Elevador Lacerda" as well as the innumerable churches (there are 323!) Decorate the urban landscape.

The Pelourinho in the upper town was created in the 16th, 17th and 18th century and in 1985 was declared world cultural heritage of UNESCO. This old town is characterized by its renaissance and baroque buildings. Hundreds of colorful houses have been renovated in recent years. Pelourinho is undoubtedly one of the most beautiful baroque districts in the world and is one of the most popular nightlife areas in the city center. But Salvador would not be Salvador without his music! The dance is in the blood of the inhabitants and the carnival of Salvador is considered one of the best of Brazil.

Arrival in Salvador and transfer to the hotel. The rest of the day is free.

In the afternoon, historical visit of the city of Salvador. During this interesting visit of the city, we will experience historical Salvador with the fascinating old town of Pelourinho. From the hotel, we go first to Barra lighthouse and take a short walk around the tower. Then we continue towards the upper town. During the trip, you can see the famous street "2 de Julho", the Campo Grande square and the Castro-Alves theater. From the upper city we enjoy a fascinating view of the suburbs and the sea. We cross the old colonial-style streets, visit the cathedral, the church of St. Francis and of course the old town around the Pelourinho.

Day 3 - Salvador da Bahia: ½ day sightseeing tour of the city
The morning is reserved for a panoramic tour of the city through Salvador. We go to the suburbs, along the football stadium Fonte Nova and the Américo-Simas tunnel, to the fortress of Monte Serrat and the peninsula of Itapagipe. We visit the baroque church Bonfim with its beautiful votive offerings. Then we head along the suburbs to Mercado Modelo, a colorful market where you can bargain with the merchants.

In the morning, transfer to Salvador da Bahia airport and departure to Brasília. Transfer to the hotel. Afternoon guided tour of Brasília. During this informative excursion, you will have a good idea of ​​the futuristic capital of Brazil. It was designed by world-renowned architects Oscar Niemeyer and Lucio Costa on the reemission board because the provincial government was transferred from Rio de Janeiro to Brasilia in 1964. The construction of this city is still considered one of the most spectacular architectural achievements of the modern world. During an exciting journey, you have the opportunity to admire the unique architecture of Brasilia.

Brasília is an icon. It was designed by the famous architect Oscar Niemeyer at the instigation of former President Kubitschek and was built in record time of only four years in a country that was still largely in apprenticeship and in the middle of the country. Inaugurated in 1961, Brasilia is one of the most spectacular achievements of modern urban development and was declared a UNESCO World Heritage Site in 1987. The approximately 2.1 million inhabitants have wide streets, numerous lakes and generous parks such as the beautiful National Park with its many animals available. The most famous buildings of Niemeyer include the Presidential Palace, the National Congress and the Cathedral.

Transfer to the airport and flight to Iguaçu.

Visit the waterfalls on the Brazilian side.
After a 200-meter walk (from the Hotel Cataratas), you can enjoy the magnificent view of the waterfalls and the Argentine side. Here begins a path a kilometer long through the forest, where one sees more and more large waterfalls and possibly also small animals, birds and butterflies.
At the end of the itinerary, you reach a platform just a few meters from the fall of the water masses - an unforgettable natural spectacle!
Then take the elevator to the main street. Possibility of a helicopter flight (optional).
A regular flight over the waters of the "Cataratas" takes ten minutes. Flights of 35 minutes can be booked in advance. These include the triangle of three countries, the cities of Foz de Iguazu (Brazil), Puerto Iguazú (Argentina) and Ciudad del Este (Paraguay), as well as the Itaipu dam (the largest in the world ). Heliport at the hotel Les Cataratas.
Then, visit the bird park. You can enjoy a guided tour of a park of exotic birds, where colorful animals can move almost freely between tropical plants.
Return to the hotel.

About Foz do Iguaçu:

The world's most spectacular waterfalls, a huge national park and the largest hydroelectric power plant in the world, are the pride of the 270,000 inhabitants of Foz do Lguaçu. The waterfalls in the south of the city (on the triangular border between Argentina, Paraguay and Brazil) are a natural wonder of first quality. 275 small and large waterfalls make their way between the rocks and the rainforest and fall with an incredible force up to 82 meters deep. Often, rainbows form and water varies depending on the content of lime and minerals. The flora and fauna of the region are extremely varied.

Day 6 - Foz do Iguaçu - ½ day: Waterfalls (Argentine side) -Foz do Iguaçu - Rio de Janeiro
Compared to Brazil, we are even closer to the cascades. There is a train leading to a platform. From here, you have spectacular views of the largest waterfall, the "Devil's Throat". On the upper path, you can discover the masses of water that fall from above. Then you go to the lower path where you can admire the game of nature from below.

Rio is undoubtedly one of the most beautiful cities in the world. It is nestled between the mountains and the sea. Numerous bays, small islands, rocks and charming coastal areas dominate the fascinating landscape. The beaches of Copacabana and Ipanema are among the most beautiful urban beaches of Brazil and are world famous. The approximately 6.5 million inhabitants (Cariocas) also benefit from many sites and leisure alternatives. The most famous are probably the Sucre Bread and its 396 meters (Pão de Açúcar) overlooking the beach of Copacabana. The "mountain" Rio is 710 meters high and houses the Corcovado with the famous statue of Jesus (Cristo Redentor).

Rio has been cleaned over the past couple of years, in many ways and a new city presents itself to visitors. Rio offers a variety of entertainment and cultural events such as concerts, plays and shows.

In the morning, you will visit one of the most famous monuments in the world: the Corcovado. Our tour takes you to the Cosme Velho train station at the foot of the Corcovado. The cog railway takes us to an altitude of 710 meters. We cross the biggest urban rain forest of the world, the forest of Tijuca. It is located in the heart of Rio and separates the south from the north. For 25 minutes through this national park, we enjoy fresh air and wonderful views. Then we pass over the stairs and the elevator to the high statue of 38 meters of Christ. On this platform, Rio is at our feet. The panorama is unique!

Our visit continues through the 2.1 km of the "Rebouças" tunnel, then the lagoon, "Rodrigo de Freitas", the tunnel "Dois Irmaos" and in the residential area "Sao Conrado". We return along the famous beaches of Leblon, Ipanema and Copacabana to the hotel.

Day 8 - Rio de Janeiro: a half day tour of the historical and cultural city with Sugar Loaf.

In the afternoon you will visit the most famous monuments including the historic center of the colonial city and the Sugar Loaf.
From the hotel, we cross the Botafogo district and the Flamengo Park. We then continue to the center of Avenida Presidente Vargas, which borders hypermodern commercial buildings. We also pass the Cathedral of Candelaria.

Photo stop at "Sambódromo". In this stadium the schools of Samba show their competitive parade during the carnival. For the spectator a world class show but for the local participants a strictly regulated issue that is taken very seriously.

On the way back through Avenida Rio Branco, we see the Municipal Theater, a copy of the Paris Opera House, built in 1909. From there, take public Cinelandia Square after the famous "Arcos da Lapa", an aqueduct of colonial times. We continue towards the famous modern cathedral "Sao Sebastiao" and the Sugar Loaf in the Urca district. A cable car takes us to the Sugar Loaf. The route is divided into two sectors. The first trip is to the hill of Urca Hill, 220 meters above the sea level after a first round views and a short walk, you take the second cable car to the summit, 396 meters above the level of the Here you can enjoy a spectacular view of the city. 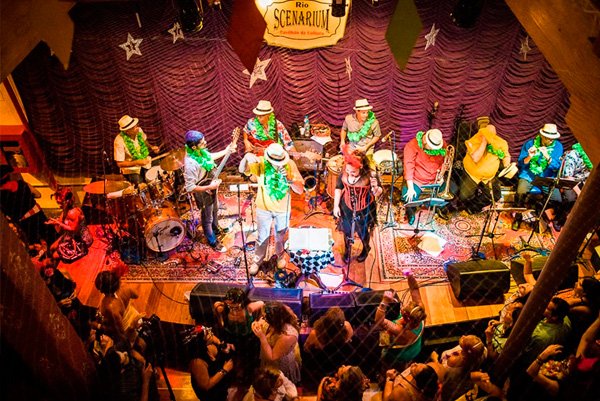 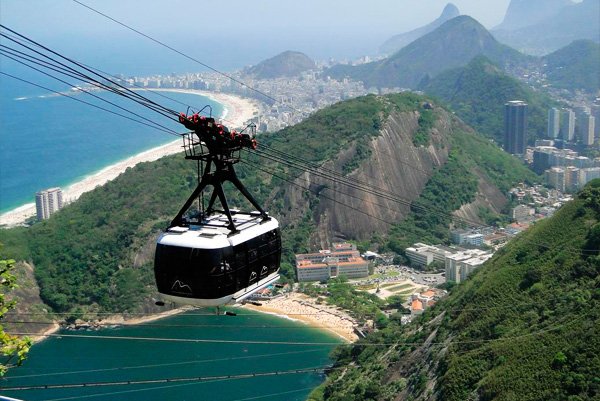 Transfer to the airport. Departure flight.

Individual extension:
Possible in or around Rio de Janeiro or Salvador (eg seaside holidays) according to the itinerary.

Prices, conditions and accomodations: on request